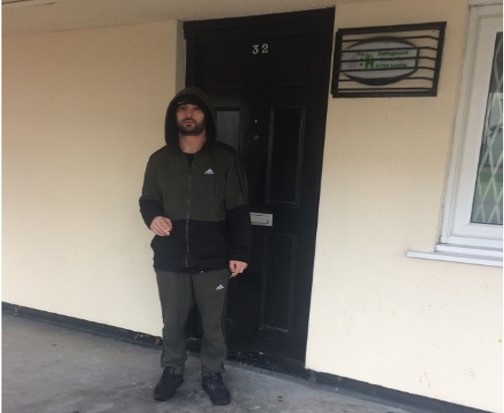 Homelessness is a difficult experience, but John got used to it. After a while it didn’t feel so strange, and in a funny way there is a kind of freedom to it. But after a while John yearned for a place to call his own. His own home, somewhere safe, stable and warm. He didn’t much care where he lived, as long as he had his own set of keys. After a long wait on the housing register, John bid for a one bedroom flat and was successful. Finally he would move from emergency overnight provision into his own tenancy.

“I was freezing in the flat and couldn’t do anything there.

On the day John moved in he hadn’t realised he would need to top up his electric metre; it had been such a long time since he had his own tenancy and in the excitement he hadn’t considered this. Unfortunately he would have to wait a week until he could top up his metre, and as the boiler required electric this meant no heating (not to mention a kettle, a tv or anything else that we take for granted in our own homes)!

After a few days of no electric and no heating, John thought about giving up. He had his own place, but it was freezing cold and all he could do there was stare at four blank walls. At least in the emergency night shelter he could have a brew and watch Coronation Street!

That is when local charity Sanctuary Trust - who had been support John in the night shelter - put an application in to Real Change. Rochdale. Thanks for donations to the fund, they we were able to access £20 for John’s electric meter. ‘I don’t know what I would do if it wasn’t for the Real Change. I felt like posting my keys in and getting off’”, John said after. For just a small amount, he didn’t and had the support to keep on the path to rebuilding his life away from streets.